Fabian advises governmental institutions including the European Commission, European Space Agency, German parliament, Chinese ministry of technology and departments such as the secretary of defense and foreign ministry, as well as Fortune 500 companies, think-tanks and startups. Furthermore, Fabian is host of the annual ‚Rise of AI‘; the European conference for 800 leaders in AI.

Prior to Asgard, Fabian was a founding employee of the Berlin-based Venture Capital company Point Nine Capital, where he invested in and helped launch companies such as Delivery Hero. Fabian previously joined the company builder Team Europe where he helped startups scale ideas to exit within a few years. He then founded Wunsch-Brautkleid, building Europe’s largest marketplace for wedding dresses, which was sold to a German wedding media platform. Additionally, he is a renowned TEDx speaker (“AI Is Eating Our World”) and regular guest at international tech conferences.

An avid Sci-Fi lover from childhood, Fabian has turned his lifelong passion for technology and human progress into investment expertise. Fabian launched Asgard in 2014 to combine his wealth of knowledge of Artificial Intelligence with his ability to grow companies and pick startup winners.

Join us for a very exciting evening about the Artificial Intelligence landscape, Singularity and our human future. 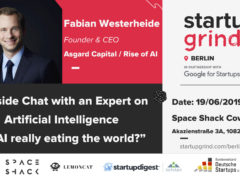 Sign up for our newsletter to receive updates on the startup ecosystem in Berlin.

You have Successfully Subscribed!